As part of its ongoing endeavors to serve the private sector in Abu Dhabi and the UAE as a whole, the Abu Dhabi Chamber of Commerce and Industry has organized an awareness session on increasing Emiratization rates in the private sector in cooperation with the Ministry of Human Resources and Emiratization, the Abu Dhabi Department of Economic Development – (ADDED), and the Emirati Talent Competitiveness Council. 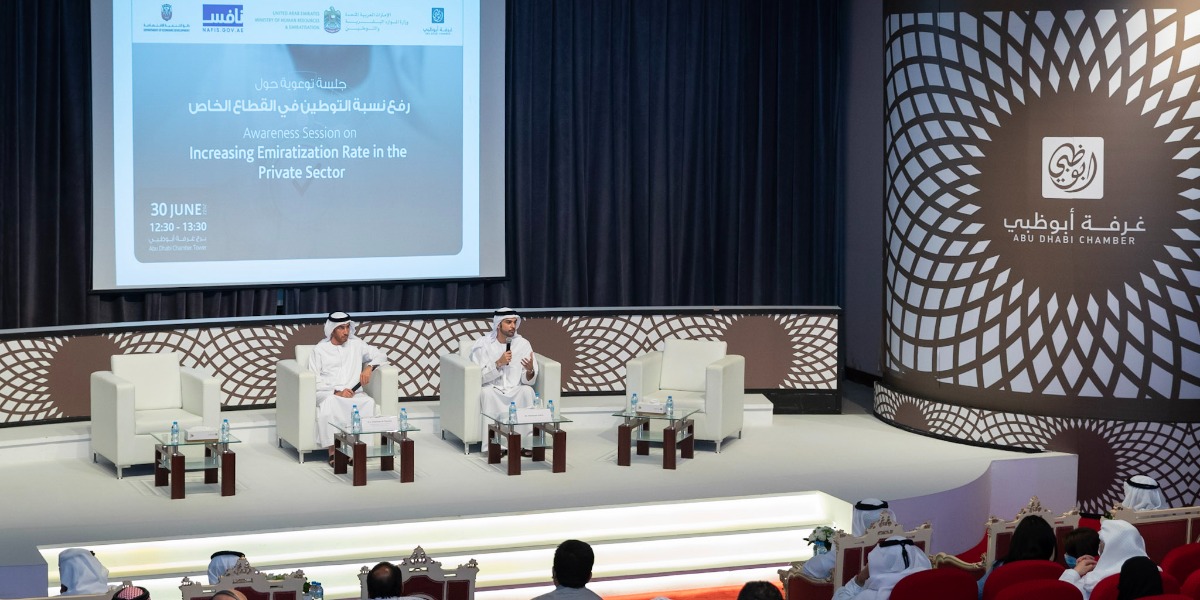 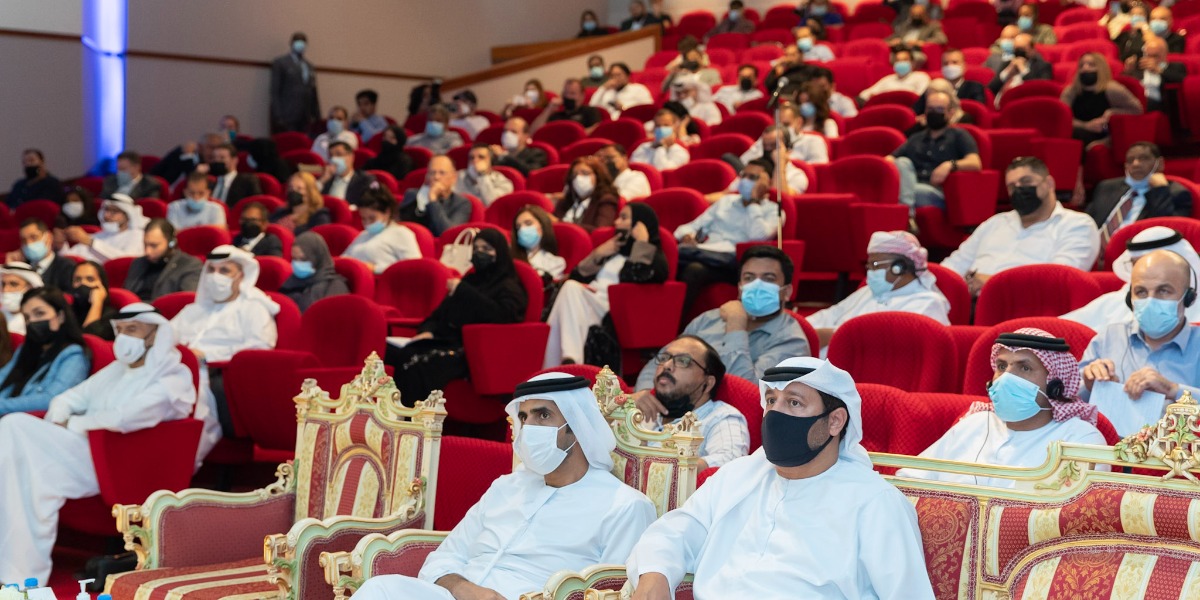 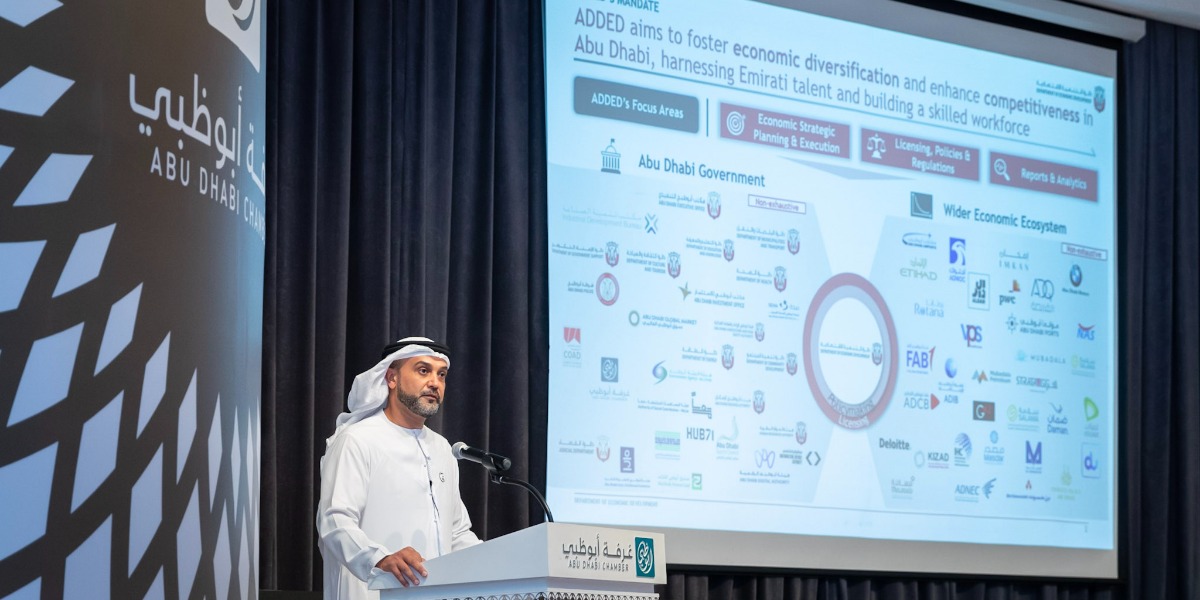 Held at the Chamber’s tower in Abu Dhabi, the awareness session was attended by His Excellency Sameh Abdulla Al Qubaisi – Director General of Economic Affairs at ADDED; His Excellency Ghanam Butti Al Mazrouei, Secretary-General of the Emirati Talent Competitive Council; and Mr. Mohamed Hakeem, Director of Absher at the Ministry of Human Resources and Emiratization, along with a large number of businesses and entrepreneurs operating in diverse sectors in the UAE.

A number of key topics were discussed during the session including an overview of Nafis and its benefits in encouraging young Emirati talents to join the private sector and how to increase Emiratization rate in private sector establishments.

In his opening remarks, Mr. Helal Mohamed Al Hameli, Deputy Director General for Advisory Centers and Councils at the Abu Dhabi Chamber, said that Emiratization is one of the UAE’s most important key performance indicators, noting that the government has been adopting a comprehensive scientific approach to train its national cadres in diverse sectors to unleash their potentials and become the key driver of the economic development process in the UAE.

He added that over the past few years, the UAE has amended several legislations and implemented financial support scheme in addition to other benefits to drive work opportunities for both young and experienced Emiratis in the private sector.

“As part of these ongoing efforts, and among the ‘Projects of the 50’, the government in the UAE has announced the launch of the comprehensive federal program “NAFIS” (or “compete” in Arabic), for which the UAE has allocated AED 24 billion to support the private sector and create 75,000 job opportunities for Emiratis over the coming few years to enable them to occupy jobs well-suited for their talents in the private sector,” he added.

The Deputy Director General pointed out that as a direct result of these efforts, the investment attractiveness of the UAE has witnessed a steady increase year after year. “The country enhanced its cumulative FDI inflows and became one of the most preferred investment destinations across the world; our beloved country has retained its #1 rank in the GCC, and #22 globally in attracting FDI as per the World Investment Report 2021 of the UNCTAD,” he explained.

Commenting on efforts to raise Emiratization in the private sector H.E. Rashed Abdulkarim Al Blooshi, Undersecretary of ADDED, said: “As Abu Dhabi is focusing on knowledge and innovation-based economic sectors, we are attracting and incentivizing talents. Investing in our UAE’s human capital reflects the vision of our wise leadership to empower Emirati talent and equip them with necessary knowledge and skills and, more importantly, to ensure that they embrace a lifelong-learning mentality, which is a future-proof approach to keep pace with ever growing developments in all aspects of life.”

“The Abu Dhabi Industrial strategy (ADIS), launched recently by His Highness Sheikh Khaled Bin Mohamed Bin Zayed Al Nahyan, member of the Abu Dhabi Executive Council and Chairman of the Abu Dhabi Executive Office, is an example of our leadership’s vision in prioritizing development of Emirati talent. It aims to create 13,600 knowledge based, quality jobs with a focus on Emirati talent. Over past years, Abu Dhabi has nurtured a supportive business environment, unparalleled connectivity and infrastructure and an entrepreneurial mindset to generate opportunities for all, enabling them to reach their full potential.”

H.E. Ghanam Butti Al Mazrouei, Secretary-General of the Emirati Talent Competitive Council, gave an overview about Nafis program, saying that it is a federal program aims at increasing the competitiveness of Emirati talents and enabling them to occupy 75,000 of new jobs in the private sector over the next five years.

He added that Nafis comes as part of the “Projects of the 50” and is aimed at Emiratis of 18 years old and over while aiming at creating new jobs for Emirati talents in the private sector.

For his part, Mr. Mohamed Hakeem, Director of Absher Department at the Ministry of Human Resources and Emiratisation, said that the resolutions taken by the UAE government comes to o enhance the participation of Emirati talents in the private sector and to increase the competitiveness of the Emirati workforce and to facilitate the private sector employment of UAE citizens.

He added that the resolution includes increasing the Emiratisation rate to 2% annually in High-skilled jobs in companies that employ 50 workers or more starting from this year until achieving the 10% target by the 2026.

Mr. Hakeem explained that companies complying with the Emiratization plans will benefit from various incentives including joining the Emiratisation Partners Club, discounts of up to 80% on the ministry' s services in case of raising Emiratization at a rate of no less than 3 times the target, provided that the number of additional citizens is not less than 30 or cooperating with the UAE Nationals Competitiveness Council “Nafis” in recruiting and training Emiratis, with a number of no less than 500 Nationals each year.