The Abu Dhabi Chamber of Commerce and Industry has organized, in cooperation with the Embassy of Ethiopia, a virtual webinar to shed light on the available investment opportunities in Ethiopia. His Excellency Mohamed Helal Al Mheiri, Director General of the Abu Dhabi Chamber, and His Excellency Suleiman Dedefo, Ambassador Extraordinary and Plenipotentiary of Ethiopia to the UAE, attended the meeting. 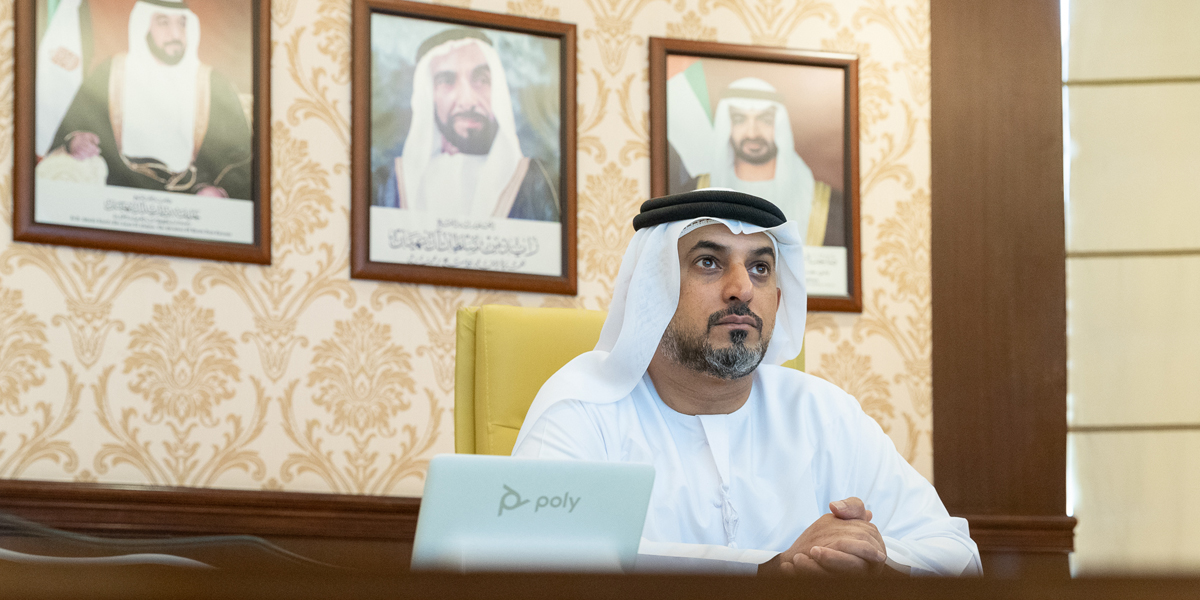 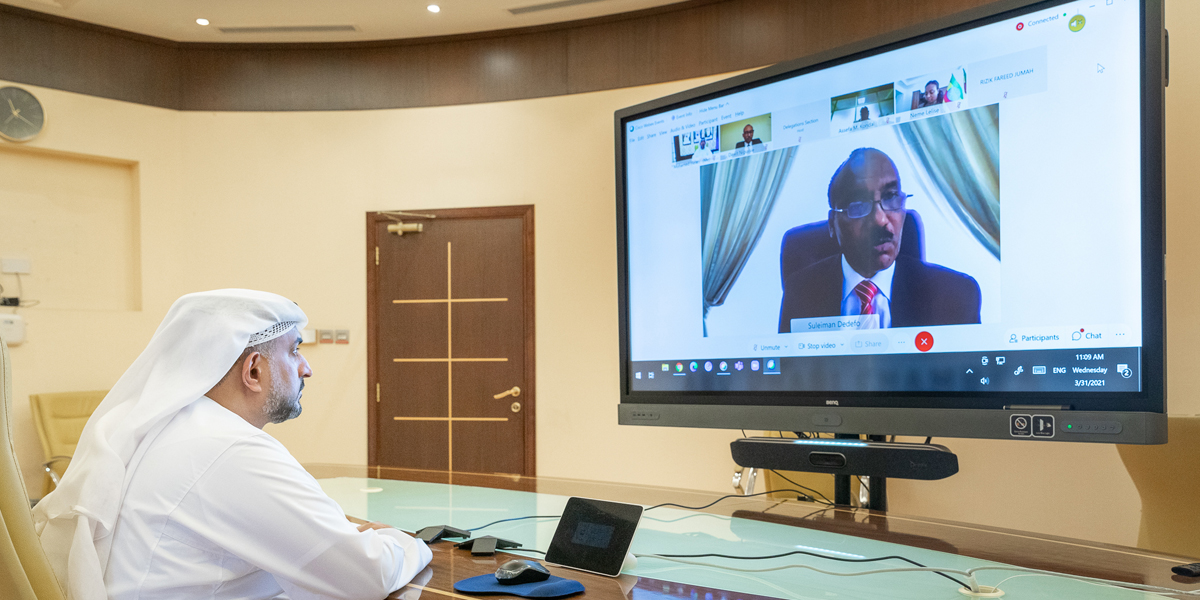 Her Excellency Lelise Neme Sori, Commissioner of the Ethiopian Investment Commission, and Mr. Assefa Mulgeta, Director General of Export Marketing  and Promotion Department at the Ministry of Trade and Industry of Ethiopia  and Deputy Commissioner General for Expo 2020, Dubai, attended the webinar as well.

During the meeting, the speakers previewed some information related to the potential investment opportunities in a number of priority sectors in Ethiopia including the textile, Leather and Leather Products, Pharmaceuticals, Agro processing, mining, ICT and tourism, in addition to a number of new sectors such as transportation, railways, healthcare, consultation services and e-commerce.

In his welcoming remarks, His Excellency Mohamed Helal Al Mheiri expressed high hopes that the webinar would open up new doors of investment, trade and joint cooperation and to strengthen the partnerships in diverse sectors with mutual interest.

Al Mheiri pointed out that the relationship between the UAE and Ethiopia is a strong and exceptional one on many levels; especially that Ethiopia is an important trade and investment partner to the UAE in the region.

“The non-oil trade volume between the UAE and Ethiopia exceeded 2.252 billion Dirhams in 2019 and the Ethiopian market is one of the fastest growing markets in Africa with a population of 110 million. This is a real and promising opportunity for mutual economic cooperation backed by a shared desire to extend bridges of cooperation in all development and economic sectors,” he said.

The Director General added, “I am confident that this webinar will contribute to increasing cooperation between investors in the UAE with their Ethiopian counterparts in the near future and in a way that meets the ambitions and capabilities of both sides.”

For his part, Ambassador Dedefo welcomed the attendance of the webinar, noting that it gives him great pleasure to be part of this tremendous event that will create an opportunity to explore more about investment opportunities and trade potentials of Ethiopia.

Ambassador Dedefo emphasized that Ethiopia and the UAE have a long-standing relation; saying that the diplomatic relations of the two countries can be traced back to 1973 and ever since, the political, economic and people-to-people ties are getting stronger.

The Ambassador pointed out that Ethiopia possesses vast arrays of resources which can offer a huge potential for investment in the area of agriculture, agro-processing, mining, manufacturing and other sectors. Hence, the Ethiopian government has been exerting efforts in order to create a conducive climate for investment in the country.

“Ethiopia has been a target country for an investment for many years and within the past 8 years we have witnessed an increased appetite from the UAE to invest in Ethiopia as well, mainly in agriculture, manufacturing, mining and service sectors among others,” he explained.

“From 2002 up to 2020, 121 UAE companies has been engaged in Ethiopia in various investment activities with capital worth of more than 2 billion birr (approximately AED177,221,000) and created permanent and temporary job opportunities for more than 10,000 Ethiopians,” he remarked. “Similarly, lots of Ethiopians have also engaged in various business activities in different states of the United Arab Emirates. In this regard, it is my firm belief that UAE will remain one of our top investment sources in the future as well.”

During the webinar, H.E. Lelise Neme Sori, Commissioner of the Ethiopian Investment Commission, delivered a presentation in which she emphasized that Ethiopia is one of the world’s fastest growing economy with double-digit growth and that the investment to GDP ratio has averaged 37.5% over the last 5 years. She added that there was Four-folds increase in FDI flow between 2013 – 2018 – from $1 billion to more than $4.2 billion, which attracted several global brands highlighting competitive investment opportunities.

The Commissioner pointed out that key government strategies have been undertaken building on the success of the past, which is economic and investment Reforms, creating a conducive and enabling environment, and Targeted investment in priority areas.
She added that opening up of the country economy is currently underway through key macro-economic, trade and regional integration reforms, regulatory frameworks reform, and investment climate reforms.

H.E. Sori remarked that sustainable infrastructures are being built to suit global standards and requirements. It now has the largest cargo network and terminal in Africa, all-weather roads nation-wide, as well as extending a railway that cuts the journey from Djibouti to Modjo from 84 hours to under 10 hours.

During his presentation, Mr. Assefa Mulgeta, Director General of Export Marketing  and Promotion Department at the Ministry of Trade and Industry of Ethiopia  and Deputy Commissioner General for Expo 2020, Dubai, said that the industrial, services and agricultural sectors are key components in the Ethiopian economy. He explained that the industrial sector contributed up to 24.77% to the GDP in 2019, whereas the service and agricultural sectors contributed 36.87% and 33.88% to the Ethiopian GDP in 2019 respectively.

He noted that coffee is the most important Ethiopian export followed by flowers and oil seed. Chat, Pulse and gold come next followed by textile, fruit and vegetables, meat and meat products and electricity.

Mr. Mulgeta added that the trade volume between Ethiopia and the UAE exceeded $2.5 million between 2010 and 2019, during which, Ethiopia imported more that $360 million worth of products from the UAE whereas the volume of its exports to the UAE exceeded $94 million.

His Excellency Mohamed Helal Al Mheiri, Director General of the Abu Dhabi Chamber, discussed with His Excellency Zaake W. Kibedi, Ambassador of Uganda to the UAE, the means of expanding trade and investment relations between the two countries in a number of key sectors. 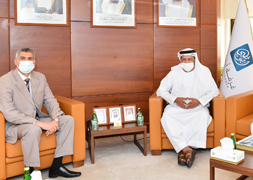 His Excellency Mohammed Thani Al Rumaithi, Chairman of the Federation of the UAE Chambers of Commerce and Industry (UAE Chambers), has received the Ambassador of Tunisia to the UAE Mr. Moez Benmim at the Chamber’s tower in Abu Dhabi and discussed with him the means of bolstering joint trade cooperation to serve the business environment of both countries. 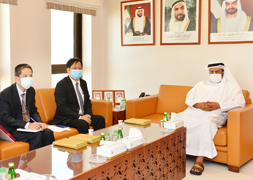 His Excellency Mohammed Thani Murshid Al Rumaithi, Chairman of the Abu Dhabi Chamber of Commerce and Industry, has discussed with His Excellency Nguyen Manh Tuan, Ambassador of Vietnam to UAE, the means of strengthening trade and investment relations between Abu Dhabi and Vietnam. 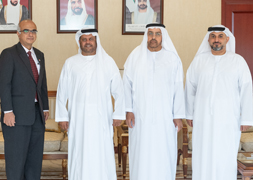 His Excellency Mohammed Thani Al Rumaithi, Chairman of the Federation of the UAE Chambers and Chairman of the Abu Dhabi Chamber of Commerce and Industry, discussed with Singapore’s Ambassador to UAE Mr. Kamal R Vaswani the means of developing trade and investment relations and sharing experiences in diverse sectors between the UAE and Singapore.