His Excellency Mohamed Helal Al Mheiri, Director General of Abu Dhabi Chamber of Commerce and Industry and Chairman of Emirates Association for Franchise Development (FAD), has received a delegation from the Ministry of Domestic Trade and Consumer Affairs in Malaysia and the Malaysian Association for Franchise Development (MFA) chaired by Dr. Radzali Hassan, Chairman of MFA, at FAD Office at the Chamber’s tower in Abu Dhabi. 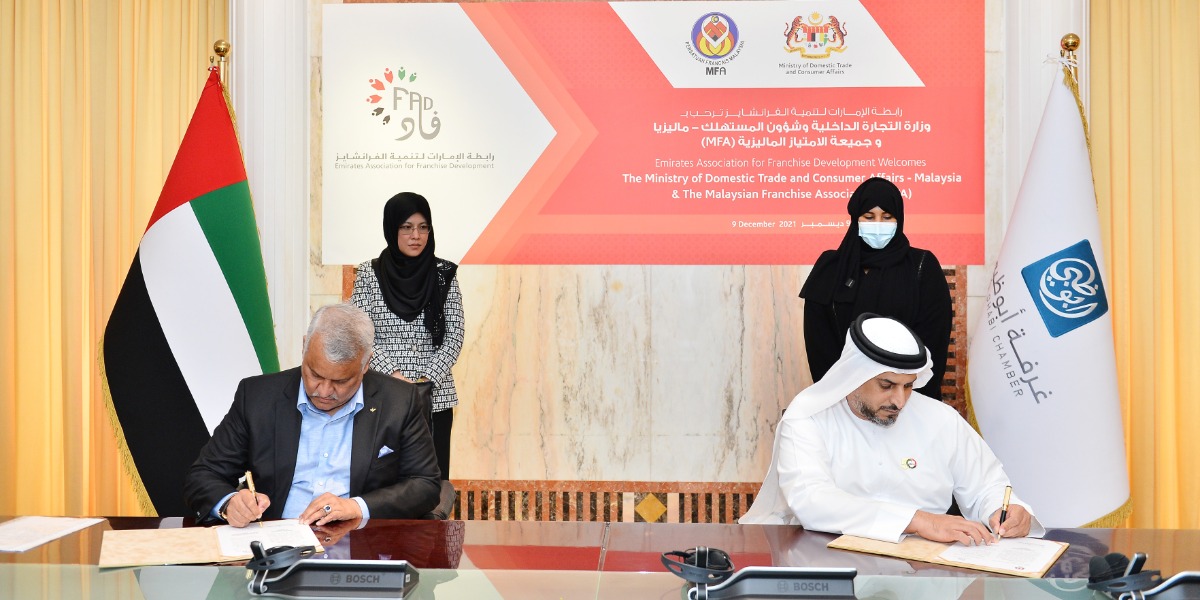 During the meeting, both sides highlighted the role of FAD in supporting businesses and the development of an entrepreneurship environment in the UAE as well as forming successful partnerships and strengthening the cooperation with franchise supporting authorities regionally and internationally.

At the beginning of the meeting, H.E. Al Mheiri said that FAD was established in 2013 with a mission to streamline entrepreneurship in the UAE, to cement close ties with the world’s franchise associations and frameworks, to provide support, services and assistance for entrepreneurs for purposes of expanding and diversifying the franchising base in order to span all sectors in the UAE, to set up a favorable climate for achieving effectiveness and efficiency in all that which is related to franchising and protecting the rights, as well as to raise awareness of franchise’s role in developing the national economy.

“FAD aims at rendering supporting, consultancy and assistance services for franchising initiatives in the UAE as it helps set up the environment, structures, systems and the fair legislative framework which would keep the rights of parties to a franchise,” Al Mheiri said. “The Association is the main destination which provides the right frameworks for resolving disputes so as to safeguard practices in the areas of franchising, for there is a code of ethics to which members should be committed with a view to establish right, rational practices in franchising.”

The Director General emphasized that franchising is expanding worldwide, particularly in the UAE considering the rapid development of the local economy alongside the existence of a flexible and encouraging business environment.

For his part, Chairman of MFA Dr. Hassan praised the role of FAD in spreading awareness amongst businesses on the importance of franchising, expressing his keenness to increase the cooperation with FAD actively.

Dr. Hassan also pointed to the role of MFA saying that it is an association with the main objective of uniting its members in view of protecting their interest, to cultivate and protect the image of franchising and encourage ethical business practice and to support the government's effort in encouraging Bumiputra's direct and active involvement in franchising. He added that the cooperation between the MFA and FAD will serve the best interests of franchises in both countries.

During the meeting, FAD and MFA signed a Memorandum of Understanding to formalize the understanding of the Parties in the organization of bilateral corporation in the area of International Trade Exhibition and Conference, Training and Country Market Research, providing information and assistance.

According to the MoU, both parties shall share each other’s experiences and share information on the development of well-known and successful businesses, provide appropriate collaborations and interconnection between parties’ members and networks and participate as exhibitors in each other’s events, promote their events to their members and help franchisors in both countries penetrate the franchise markets of the UAE and Malaysia.

It is worth noting that the delegation of the MFA comprises of eight pioneering Malaysian brands that are in the UAE to participate in Expo 2020 Dubai aiming to promote their activities, take a closer look at the available investment and trade opportunities with the intent of opening franchise branches in the country whilst penetrating new markets.