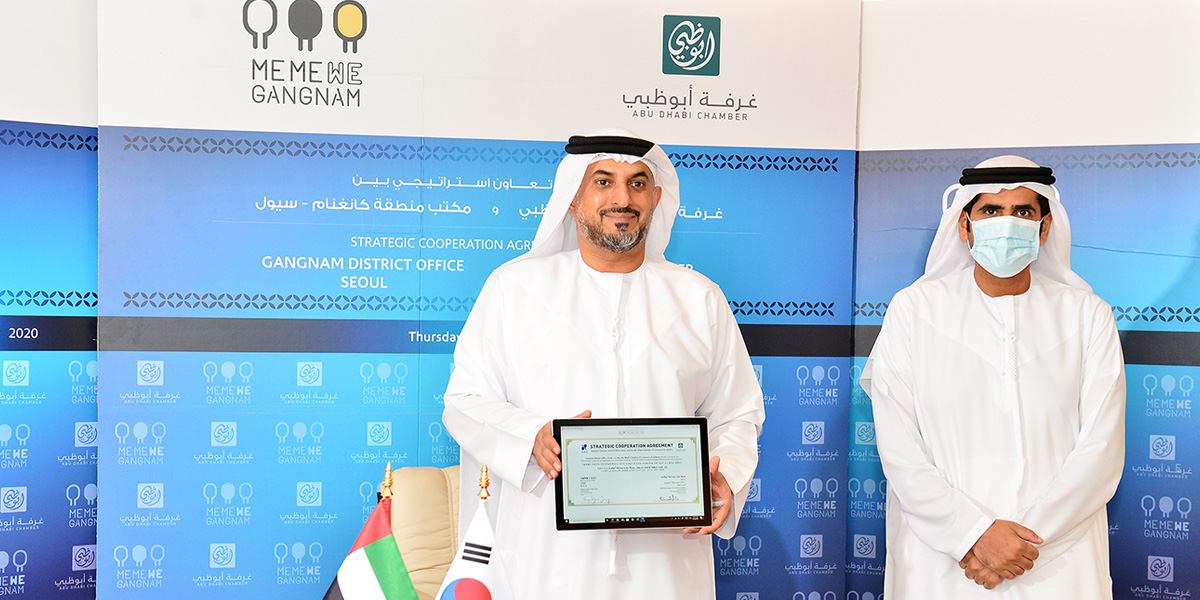 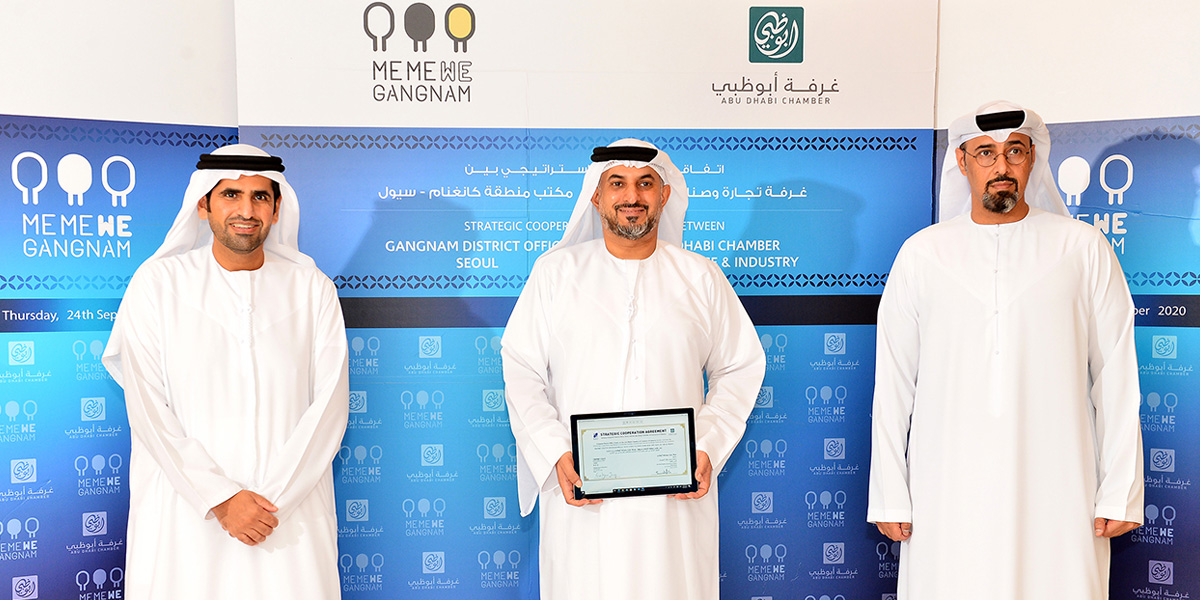 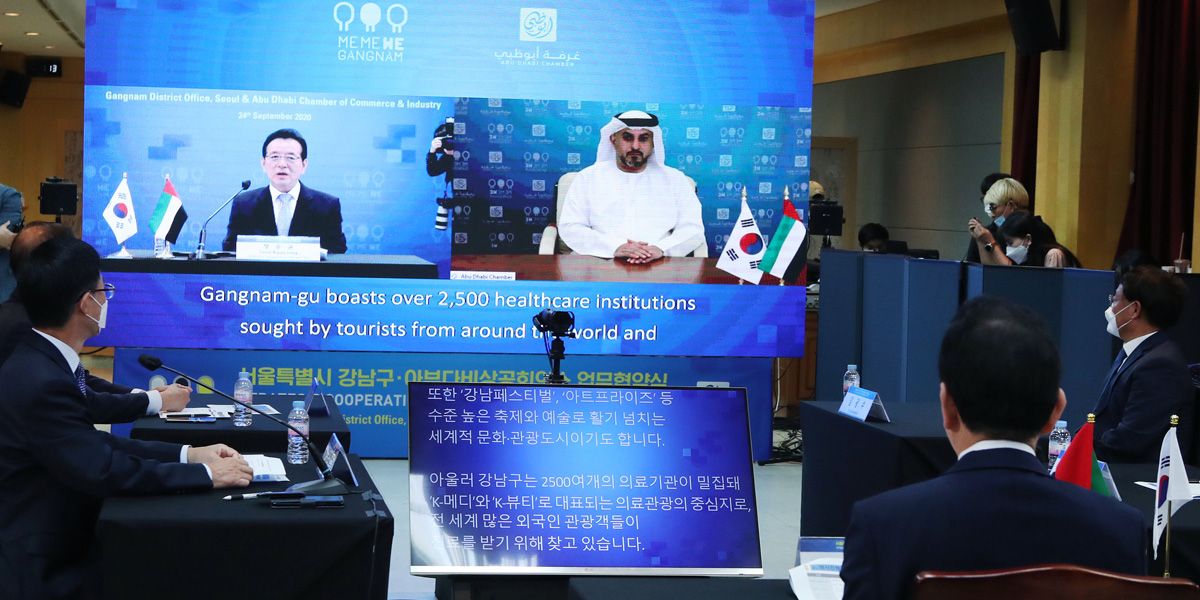 His Excellency Mohamed Helal Al Mheiri, Director General of the Abu Dhabi Chamber of Commerce and Industry, has signed an MoU with Jeong Sun Kyun, Mayor of Gangnam District, S. Korea, to develop and strengthen their strategic partnerships, expand their trade channels, and increase cultural and tourism exchange through the strategic representative office of the Chamber in Gangnam District.

The signing ceremony took place during a virtual meeting organized by the Chamber and was attended by Mr. Rashid Saeed Al Shamsi, Chargé d'affairs at the UAE Embassy in Korea; Mr. Hakhee Jo, Executive Managing Director of the International Affairs Group at Korea International Trade Association(KITA); and Ho Jang, Representative of the Chamber’s Office in Seoul.

During the meeting, H.E. Al Mheiri, said that the COVID-19 pandemic did not stop the Abu Dhabi Chamber from performing its duties in supporting businesses. “On the contrary, we were able to go on providing our services and holding to ensure the growth of businesses. In addition we are holding virtual meetings to sign agreements and extending bridges using modern technologies,” he said.

“Despite the challenges the world economy is facing, but the Abu Dhabi Chamber has always been there to provide the necessary support for the private sector.
We are completely confident in our wise leadership. Thanks to their directives and the joint work with our partners we will overcome these challenges and turn them into real opportunities for a more prosperous future,” Al Mheiri added.

The Director General pointed out that the economic relations between the UAE and Korea are very strong and trade figures and statistics are a proof of that. “In addition, the Chamber is the first to set up a representative office in Seoul back in 2015,” he said, noting that this agreement is the ninth agreement the Chamber signs with prominent establishments and authorities in Korea.

Al Mheiri added that Gangnam District is famous of its exceptional healthcare sector. “According to this agreement, the Abu Dhabi Chamber, in cooperation with the Department of Health Abu Dhabi, will organize Abu Dhabi-Korea Healthcare Week, which is due to be held in cooperation with KITA in October. The event will be an interactive platform for the related businesses,” he concluded.

For his part, Jeong Sun Kyun, Mayor of Gangnam District, said, “Under the current challenges and restriction due to COVID-19 pandemic, we are cooperating with the Abu Dhabi Chamber through this MoU to expand our bilateral exchange in all sectors; especially that Gangnam District is a home to some of the most famous entertainment brands in the world. Gangnam also a home to more than 2,500 healthcare establishments that attracts tourists from across the globe, hence the name “Tourism Therapy Center” Gangnam is known for. 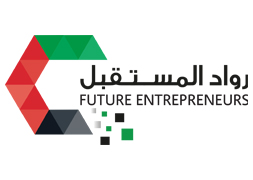 The Abu Dhabi Chamber of Commerce and Industry announced today the beginning of the final assessment stage of Future Entrepreneurs Award 2020.

Abu Dhabi Chamber receives the Ambassador of Pakistan to UAE

His Excellency Mohamed Helal Al Mheiri, Director General of the Abu Dhabi Chamber of Commerce and Industry, has received His Excellency Ghulam Dastgir, Ambassador of Pakistan to the UAE, at the Chamber’s tower in Abu Dhabi. 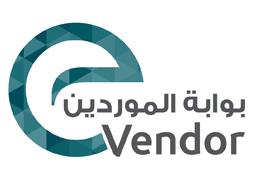 Within its pursuit to offer its members a premium package of smart services, the Abu Dhabi Chamber of Commerce and Industry has launched the e-Vendor portal tailored specifically to suit the needs of suppliers including suppliers’ registration, purchase orders, tenders, contracts and invoices to name just a few. 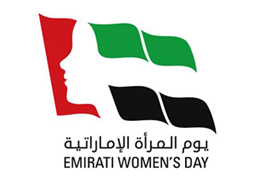